Pitchfork made a list of 25 new artists "that help us consider the future of music: how it’ll be made, where it’ll come from, what role it’ll play in shaping scenes, and how genre lines may be increasingly dismantled". Some of the promising ones the P staff chose: MIKE for being "a beacon within the modern rap underground", Black Midi for "oddity and unpredictability", 100 Gecs for their "extreme pop music", Moor Mother for her "radical message", Bartees Strange for "his vision of what guitar music can encompass", Yves Tumor for their "restless experimentation", Amaarae for "bending the boundaries of Afro-fusion music", Navy Blue for being the "leader of a new class of introspective rapper-producers", Blood Incantation because they've "elevated old-school death metal into a psychedelic, ever-expanding solar system". 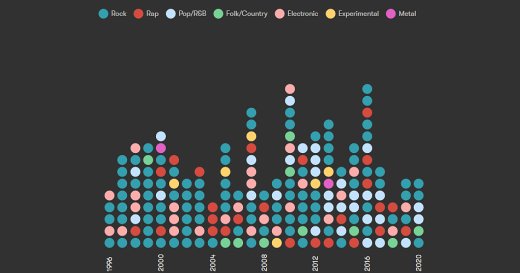 Before
Primary Wave buys Bing Crosby's songs and name for $50 million
After
Dave Gahan about getting in "the zone" on tour: I have to be fully in
Best of

Alewya makes a turn with 'Play'

Mitski shares a new song, and a great video to go with