The Street Music Research Unit is a new initiative from the University of Adelaide in Australia studying street music in all its forms, historical and contemporary. The Unit is interested to learn why people busk, and where they busk and the role that festivals, government regulation and technology play in buskers’ livelihoods.

A lovely story: A drunk smashed busker's guitar, Jack White bought him a Fender instead

26-year-old busker Matt Grant was playing his guitar on a street in Edinburgh when an allegedly drunk woman smashed his only guitar (the young man is kind enough to call her a "lady" in a Tweet). “That’s a £300 guitar... Obviously, if I don’t have a guitar, I can’t busk. If you could help out, I’d be — massive appreciation” - Grant said and set up a GoFundMe, which was a great success (he got over £4,000) so he went and bought a new guitar, The Daily Record reports. While he was buying a new guitar, he got a call from Jack White's manager telling him the guitarist feels bad for what happened and wants to buy him a new guitar. And so he did - a £3,600 Fender Stratocaster. Good beats drunk, after all!

Busker Martin McDonnell was playing Hozier's 2014 hit 'Take Me To Church' on a street in Dublin when a masked shopper stopped by do drop some cash in busker's guitar case. The singer immediately recognizes his patron, and halts his performance - “Thank you so much, have a good one man. Wow, that was Hozier!”.

British buskers back on the streets

This week UK buskers have returned to the streets, which brought out the issue of the exchange of physical money. World Health Organisation has countered claims that banknotes could transmit Covid-19, but they did however emphasised the importance of hand-washing after handling cash. A busking guide recommends that buskers use “a box with plastic inside for your drops” but stresses the public health benefits of cashless reader and PayPal. Yet James Stephen, a folk busker from Stockport, said that PayPal “has a few more steps in it than opening your wallet and throwing a coin in. People may think, ‘Oh well, bit of a faff that, I’ll just walk past’”.

Based exclusively on online map tags, the global busking festival scene is estimated to include over 170 street music events, the Conversation writes about the underestimated and unrecognized art of playing music on the streets. But, there are things going on - a nine-day Ferrara Buskers Festival in Italy, Edinburgh Festival Fringe in Scotland, and Fête de La Musique in France. Curation projects like The Music Man, SoundsLikeVanSpirit and StreetMusicMap identify busking hubs such as the subway systems and public squares in world cities. The Busking Project is a platform where people can join as a busker or as a fan, and artists can be hired for events and earn cashless tips.

The council of Chelsea and Westminster will next year introduce public space protection orders, which make predefined activities – in this case, busking – prosecutable in specific areas. Buskers say high street’s biggest problem is councils that don’t understand busking’s role in the community creating uncertainty for those who practise it. Guardian... 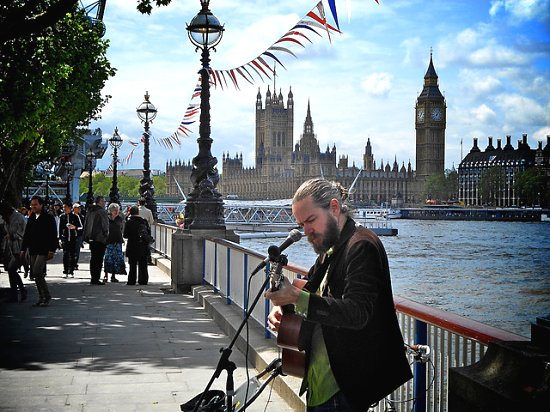 London is to introduce a contactless payment scheme for buskers in what organisers say is a world first. The project Busk in London will allow street musicians across London to accept payments via cash, contactless cards, wearable technology and chip and pin. Charlotte Campbell, a full-time busker in London, said she had seen a “significant […]